Over on Twitter dot com, I was nearing 5,000 followers and I promised that if I reached that number I would celebrate by writing an anime and beer pairing post. This got a lot of my followers excited and I was having a lot of fun thinking of certain pairings!

…and then life happened and it fell in the backburner.

To be fair, a lot has happened, but I was always writing notes and, most importantly, making good use of my Crunchyroll subscription for inspiration. You could say that I made use of the long time before writing this to research properly! Yes, let’s go with that.

So before we get into it, I’m going to say right now that this is only part 1 of 2. My intention is to give you an anime and beer pairing six pack, but right now this piece has three shows highlighted and is sitting at over 1700 words, so for the sake of your patience and time, I’m breaking this up into two pieces.

So with that, *uncovers a rose and holds it up by her cheek* let’s get into it, shall we?

This one is kind of a topical requirement, as Netflix recently came out with a rerelease of the hit series.

It’s…really hard to put Evangelion into a summary. On the surface, and at the beginning, it’s about giant monsters called Angels attacking the city of Tokyo-3 and the UN-funded organization NERV defending the earth with the use of Evangelions (Evas), giant, heavily-armoured humanoid cyborgs that pilots synchronize with, allowing them to feel the damage the Evas take on in battles. The series follows Shinji Ikari, the 14 year-old child of NERV’s commander, Gendo Ikari (who hasn’t talked to Shinji in years and is clear from the start doesn’t care about him). Shinji is brought on to pilot one of the Evas and he becomes incredibly adept at it, despite his constant reluctance to get in the robot and fight.

But the show is so much more than that. The characters are constantly coming to terms with their psyches and the show itself is intertwined in the life of the show’s creator, Hideaki Anno, whose lifelong struggles with depression and alienation shaped the series, leading it to be the avant-garde success that it is. As a warning, watching this anime while depressed is…kind of a bad idea.

I didn’t do the show anywhere near justice, but there we go. I should say that the Netflix version definitely has its issues. The new voice casting for the dubs are really not good, they removed the iconic rendition of “Fly Me To The Moon” in the end credits, and, perhaps most importantly, removed a heavily coded queer relationship into something more ambigious.

So what beer would I suggest with it? Well, I’d actually suggest a Pale Lager. Specifically Sapporo’s Yebisu, which is pale lager with light grassy notes, hint of lemongrass, and a very crisp finish.

Why that specific one? Well, it just so happens to be the beer of choice for NERV’s Operations Director, Misato Katsuragi, who takes Shinji in to live with her. Funny bit of trivia, when the show was originally airing, the station didn’t like that the beer brand was being displayed in the show because they regarded it as free advertising. So from episode 2 onwards the name of the beer was changed to Yebichu. When the show was rereleased on VHS and DVD, however, the original Yebisu name was restored.

So that’s what I’d suggest, but since we don’t get that here in North America unless you know some small shops that import it, I’d probably go with regular ‘ol Sapporo Premium, which has some bready notes, a little bit of lemon, and a touch of honey in a light and crisp body. I know that the craft nerds might get upset by that, but honestly, it’s a beer that was in the actual show and will probably pair really well with the feelings of depression and isolation slowly setting in with the realization that you can’t communicate your needs and that’s why all your relationships fail. Actually, when you reach that point, something stronger may be required.

This show…really hits me in a lot of ways. Some not great, but other times it can be incredibly warm and endearing.

Chise Hatori is the teenage protagonist in this show and she’s…been through some shit. When she was little her father left her and her mother killed herself in front of her. She was adopted by relatives who didn’t want her and to make matters worse, she had developed a rare magical gift that allowed her to see creatures that regular humans can’t see. Feeling numb and not really having any care for her life, she agrees to be sold into slavery and is auctioned off at a magical marketplace where she is purchased by an incredibly powerful thorn mage to be his apprentice and, eventually, bride.

Okay, look, I know that sounds really screwed up and gross. But the thing about it is…the show is aware of that as well and from that crude beginning the story kicks off into realigning the power imbalance of the girl and the thorn mage and focusing primarily on Chise’s recovery, finding a sense of family and, more importantly, SELF in a world that’s rich and beautiful with magic, fae folk, and wonder. It’s not a particularly comfortable show to watch if you’ve been through your own set of childhood traumas and altered feelings of self-worth (a raised fist of solidarity to you if so), but the slow and gradual sense of healing, as well as the many tumbles along the way, bring on a sense of relatability to them. 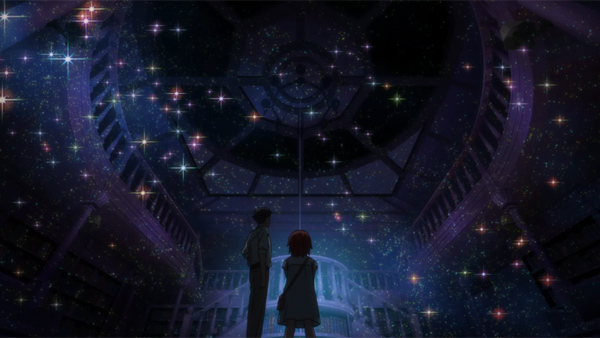 Hell, I’m going to admit right now, I cried after watching the prequel series, “The Ancient Magus’ Bride: Those Awaiting a Star”. It’s an anime that really required some effort to get past the initial premise and managed to turn into one of the most visually stunning and captivating shows out there.

So what beer to suggest with it? Well, as this takes place in the English countryside, I’d have to say that a good Bitter from the

cask would hit the spot. Here in Toronto, that only means Granite Brewery’s Best Bitter Special. Internationally, if you’re lucky to find a glass of Bathams Best Bitter that isn’t in a bottle, go for it. In Seattle, Machine House Brewery’s flagship Best Bitter is also a good choice even in bottles. But if you want the one that’s always going to be in stores, just grab a few cans of Fuller’s London Pride. What you’re after is a beer with an earth quality to it that’s full of fruity and even floral elements wrapped up in a warming, bready malt backbone.

This is seriously one of my all-time favourites.

Blood Blockade Battlefront is the creation of Yasuhiro Nightow, who created the renowned badass series Trigun. And if you like urban fantasy mixed with wonderful humour and incredible action, this is possibly the best show for you.

Three years previous to the show, a gateway to “The Alterworld” (Also known as “The Beyond”) opened up in New York City, creating an impenetrable bubble around the city and unleashing monstrous creatures from another dimension who, much like everyone in New York, just want to live their life. So, as is typical with bizarre, world-changing scenarios in anime (And let’s face it, in New York), everyone just sort of accepted that as the reality and moved on. Now called Hellsalem’s Lot, the city features everyday moments like a landlord evicting his tenant because the presence of a malevolent god near the building has given him the opportunity to turn his building into a luxury hotel.

The show follows young Leonardo Watch, a photographer who was granted the “All Seeing Eyes of the Gods”, a power that gives him incredible sight, by a mysterious being who exchanged the power for Leonardo’s sister’s vision. He came to Hellsalem’s Lot to find a way to help her and ended up getting involved with Libra, an organization that takes out monsters and terrorists that threaten the city and even all of existence.

So as far as a pairing for the show would be concerned, I feel like I have to go New York on this one and for the show’s kind of every day city feel, it has to be an IPA.

While I feel that Grimm Artisanal Ales’ Magnetic Tape IPA brewed with oats and Mosaic & Motueka hops (huge burst of tropical fruits with a dry finish) might be good for select episodes, a more thematically appropriate one might be Merman IPA from Coney Island Brewery, with grapefruit and pine notes in a malt backbone. Perfect for picking up at Key Foods after a long day of fighting a demonic trickster.

However, for one particular episode I have a specific pairing.

A dangerous drug called Angel Scale appears on the streets, with one person on the drug attacking the President. Libra’s leader, Klaus von Reinhertz, journeys into the Alterworld to uncover the source of the drug from an insect-like crime boss, Don Arlelelle Eruca Fulgrouche. The price for the information, however, is to beat or draw with the crime boss in a game of Prosfair, a chess-like game that is the most complex in the universe, getting more and more difficult as time passes. If Reinhertz loses? He dies. 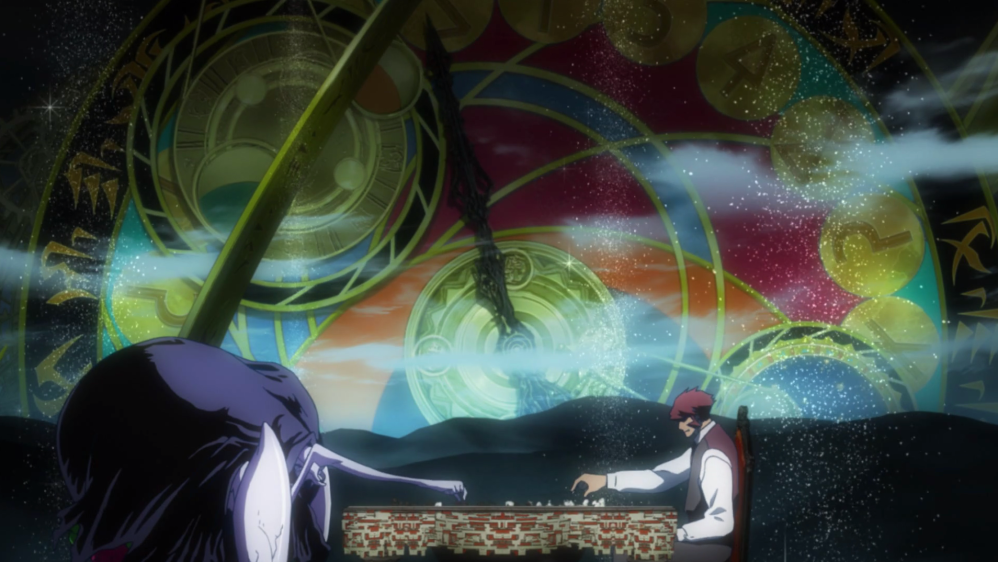 This episode is one of my favourites because it highlights the show’s stunning art and music, while showing the less violent side Libra utilizes to take out terror threats. And

considering that the game of Prosfair, a game that grows more and more complex and, as Don Fulgrouche would say, beautiful, I’d have to suggest my old favourite, the Westmalle Tripel. With a beautiful golden orange colour and floral, spicy notes blending with sweet Belgian Candi and a warming feeling from the alcohol, this beer is best appreciated as a slow sipper, growing more and more complex with time spent in your glass. It’s a natural fit for this one particular episode.