Yes, GATEWAY BEERS.  Just like The Rock And Roll is a gateway to gang violence, Satanism and baby murdering, so too are there beers that lead you down a path where there is no turning back.  Take the story of Johnny. He was captain of the basketball team.  He didn’t think there was any harm in trying a beer from Belgium.  But after that it all changed for Johnny.  He quit the basketball team and started attending underground craft beer events.  Split the money with his hoodlum friends in ordering some Bolivian Pale Ales to be shipped to his town.  Three months later Johnny was found dead in an alley, a broken bottle of Westmalle Triple in his hand.

Sorry, I have a passion for mental hygiene films. These just come out.

Basically, this was inspired by the friends and family I have who have said “I don’t really drink beer, but when I do I usually drink _______.  What should I have?”. 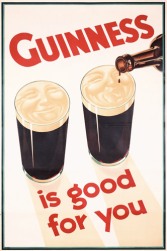 I’ll say this now.  Guinness is a great drink.  It really is.  For years it’s been known as the beer someone orders if they don’t like the weak mainstream drinks like Molson or Bud.  It’s rich, smooth, creamy and can easily substitute a meal.  It has a wonderful history and a great tradition and while there is a slight risk of looking like a douchebag while drinking one (especially if you explain why it’s so better than the beers your friends are drinking) that doesn’t take away from the fact that it clearly is a work of art in itself.

But, as is the point of this series of posts, there is more out there.

I won’t lie to you.  To find a suitable “next step” for you might take a bit of trial and error.  But the first thing to do is examine what it is you enjoy about Guinness.  Primarily the “heaviness” of it.  On that, there’s three levels to it.

1.  The heaviness frankly scares me and I want something a bit lighter
– Well it sounds like a nice dark ale would suit you down to the ground.  Hobgoblin Ale by the wonderful Wychwood Brewery was a WONDERFUL starting dark ale for me and to this day remains as an ol’ stand-by when I don’t have a specific beer I want to pick up.  A wonderful dark ruby colour with a taste of chocolate and toffee.  It’s refreshing, comfortable and not as much a meal as Guinness can be.

Another suggestion would be Leffe Brune, a nice little Belgian number that I grew fond of last summer.  A soothing beer with a slight hint of roasted spices and  fruits and a bitterness that’s not overbearing at all.  Truth be told, I actually cook with this as well (see the recipe I posted last week).  Definitely a drink worth trying.

2.  The heaviness is just right, actually.
Well, have I got two beers for you then.  Dragon Stout out of beautiful Kingston, Jamaica really fits the bill for this.  It’s got about the same heaviness of Guinness with a nice, chocolaty finish to the taste.  This is DEFINITELY ideal for a hot sunny day.

Second up is Black Creek Porter out of Toronto’s own Black Creek Historic Brewery (actually in Black Creek Pioneer Village if, like me, you have fond memories of that place. Now’s a reason to go back!).  While a porter is usually supposed to be “heavier” than a stout, I find this one hits the mark rather well.  Nice chocolaty taste with a hint of spices.  This is also a recipe used my Ontarians in the 1860s, so it also provides a nice history to it.  I just recently started drinking this beer and I can’t get enough of it.

3.  Guinness is FAR too light for me.  Give me something heavier!
Alright there, Rambo.  First up is Fuller’s London Porter from our good friends at Fuller’s Ales.  One day my mother, who wanted to teach

me about some of the brews she grew up with, bought four cans.  Two was Fuller’s London Pride (which we’ll talk about later) and the other two was this one.  And MAN, was it refreshing.  A deep black colour that not even light can escape out of and a smooth, creamy taste with a strong taste of cocoa.  If Guinness is a meal, Fuller’s London Porter is a meal with seconds.

The second one I’d suggest is John By Imperial Stout by the Scotch-Irish Brewing Company in Ottawa.  All I can say about this beer is: DAMN.  I tried it for the first time last weekend and was really impressed.  Much like the London Porter, nothing can escape the darkness held within and there’s a strong cocoa taste to it.  I’ll be honest, this was a drink that I could probably have one or two of.  You actually feel FULL after this drink, which can be said about many Imperial Stouts, but it still is refreshing.  A wonderful brew.  I actually wonder what it would be like at room temp…

And that’s all for now.  And damn, now I think I’m going to head off to the pub and have a London Porter.  I got me the craving…