So the LCBO brought us a treat in the past week. With their famous one-shot program, they gave us beers from the famous Garrison Brewing Co. in Halifax, Nova Scotia. Being as they are, the LCBO has said that once these are sold off the shelves they’re gone. And it’s that which compelled me to go above my spending limit for the week and purchase three bottles from this brewery. The Spruce Beer, the Grand Baltic Porter and the Premium Black IPA. So let’s get to know our Halifax cousins, shall we? Yes. As a note, I’m writing down my first impressions of them. This post is being written as I’m drinking.

First up is the Spruce Beer. 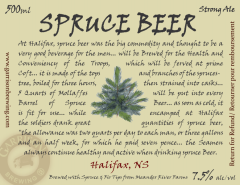 One of the oldest beer styles in North America and also a favorite of the Scots. I’m so pleased to note the use of Blackstrap Molasses and Dates in this one, which is a big difference from other beers of this style I’ve had, which just added the Spruce. Let’s have at ‘er.

AROMA: Syrupy sweetness backed right up by the mollasses with the dates following it like a small and nervous accountant follows a mobster. I can already tell that the Molasses is going to be a force and that I’ll really love this when we actually get some snow over here.

TASTE:  SPRUCE.  Oh man, the Spruce and Fir hits me like a baseball bat. How so refreshing to have the spruce be the forerunner with flavours in a beer of this style! Slight hoppiness.  The Dates are a bit stronger here. The Molasses is as strong in the taste as it was in the aroma and adding a wonderful warmth to this beer (with a slight smokiness at the end). Wow.

VERDICT: I think I found one of my top 5 winter beers this year. A classic recipe with a warmth that gets you through the season. A wonderful, WONDERFUL version of this style. Ten points to Gryffindor (or…whatever). 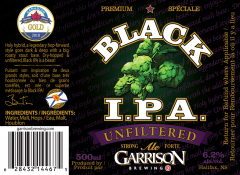 Now, ever since declaring this style as one of my favourites, I’ve been REALLY picky as to my Black IPAs. I’ve had ’em good and I’ve had ’em spit-back-in-the-glass horrible. I’m also a hop-head. So let’s see if this holds up to my standards.

COLOUR: Black with some ruby highlights.

AROMA: Sweet, citrusy hints in the aroma. If I were to guess, I’d say that Cascade hops were used in this. Hint of chocolate and coffee with some roasted malt tones to it. Interesting.

TASTE: …you know, if I didn’t know this was from Halifax, I would assume this was a West Coast brew. This is slightly weaker in hoppiness than my ALL-TIME favourite (Stone Brewery’s Self Righteous Black IPA) but it’s the closest I’ve had to it. Hoppiness DEFINITELY hits and I still stand by in thinking that Cascade was used to add to this grapefruit citrusy flavour that hits you first. Chocolate is definitely in the back of this with some really nice coffee notes. It’s like the hoppiness is punching you and the chocolate, coffee and malt flavours are hugging you as if to say “I’m sorry, baby. But you know how jealous I get”.

VERDICT: I would have to be in the mood for it, but definitely one of the strongest efforts I’ve seen in a Black IPA from this country so far. The hoppiness borders to the point where some people would have to send it back, but that’s just how I like my hoppy beers. 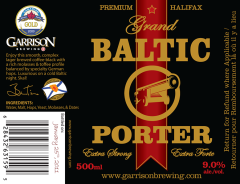 I love Porters (ESPECIALLY in this cold winter season) and this brewery already made me a lover with the other winter beer, the Spruce Beer. So let’s see how this one goes. This also seems to be their big award winner, giving them two golds and a bronze at the Canadian Brewing Awards, a Gold at the World Beer Championships and an “Innovative Beer of the Year” Award at the Taste of Nova Scotia Prestige Awards.

AROMA: Sweet aroma (almost like dried fruit) with hints of toasted malts and tailed by some molasses, which is kind of creeping in to the room like the neighbour you forgot to invite to your party.

TASTE: Very thin mouthfeel (compared to the thick-as-sludge porters I’m used to, but Baltic Porters traditionally have lager yeasts). So that sweet aroma I was smelling? I think I got the taste of it and there’s definitely a taste of berries and cherry in there. Quickly followed by chocolate and a nice hint of brown sugar. The molasses makes an appearance and finishes it off nicely with a toasty, smokey hug. The alcohol provides a nice warmth here.

VERDICT: Not the GREATEST of Baltic Porters I’ve had, but still a nice comfortable beer to have around. It might be my second or third choice of beer to have on a cold winter night.

So there we go! I’ve learned something about this wonderful brewery. I can say beyond a doubt that I will definitely be sad once these beers go off the shelves here in Ontario for good. I would be more than happy to try the other beers they have and write about it, but sadly I don’t see myself being able to afford a trip to Halifax too soon.

Thanks for reading, folks!