Well, it’s about half past midnight as I write this and I’m just about ready to go to bed. But like anyone in their late-20s, I need a bedtime storybook that caters to my fast-paced, on-the-go, beer-loving lifestyle. I need stouts. I need bears. I need a walrus, and I need some beer.

“Goodnight Brew“, written by Ann E. Briated (haha no really, her name is Karla Oceanak) and illustrated by Allie Ogg, is at first glance in the same vein of “Go The F*ck To Sleep” or any of the other “Goodnight Moon” parodies in the sense that it’s a more adult take on a medium that is normally reserved for children. Admittedly, when I was sent an advance copy to look over, I didn’t know what to make of it. In a few ways, it struck me as sort of a cutesy gift.

But you know what? I just can’t get over how staggeringly adorable this book is. Goodnight Brew shows us the time in which the employees of a brewery (such as a black bear named Charlie with sweet malted barley and a whirling wort hog) shut down for the night.

The art is very cute, showing the camaraderie of workers in a brewery incredibly well and really bringing some whimsy to that world. With the words, Oceanak really must be given credit for her fun wordplay that didn’t sound particularly strained. One of my favourite parts of this book, however, was at the end, which featured a nice little look in to the basics of brewing beer and a few handy basics on different styles. It’s not a dictionary, but it’s enough to inform an absolute beginner.

When thinking of a use of the book it hit me that, if a parent was very big in to say, homebrewing, this book would be a fun guide to explain what they do and kind of let them in to that world a bit. Though I can’t comment on this from the parent side, as last I checked I didn’t have a kid, the book, especially the tail end, seems like a good introduction to that world without…you know…taking the kid to a bar and ordering them pints. 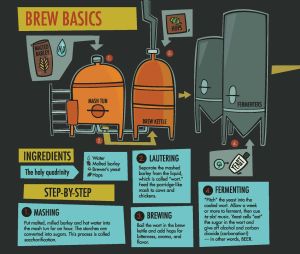 As Oceanak says: “I live in Fort Collins, Colorado, and when visiting New Belgium, Odell, or any of the other fantastic brewery taprooms here, noticed that I was often surrounded by families with younger children. For many people, home-brewing and craft beer seem to be family affairs. Also, Goodnight Moon is a nostalgic book for many people in their twenties and thirties. So I thought, why not do a parody for grown-ups who love craft beer—a “pitcher book” for grown-ups—but at the same time, make it a book those grown-ups can read with their kids and grandkids if they choose? Lots of Goodnight Moon parodies are inappropriate for children, but, if craft beer is a normal and healthy part of your family culture anyway, Goodnight Brew is copacetic for your kids.”

In the end “Goodnight Brew” gets lots of points for being cute and making me chuckle. And sleepy. I got a kick out of flipping through it.

Goodnight Brew is put out by Bailiwick Press and will be available on September 23 wherever books are sold. Here’s an Amazon.com and an Amazon.ca link for you.