As many readers who have been following this site for a while have known, LGBT representation in the craft beer world is something that is on my mind quite a bit. I adore the conversation that is currently happening surrounding women in the craft beer scene, but one of the least talked about topics has been making the sign welcoming LGBT folks a bit bigger. A select few people who read last year’s post (mainly, surprise surprise, straight white dudes) not only saw no issue with how things currently were, they didn’t seem to get that when talking about an interest group, there’s still social obstacles to get through (So the argument of “it’s just beer” is invalid. I’m not talking about the beer, I’m talking about the group of people that drink and enjoy it). An example I gave on what would be great to see more of are the amazing gestures of inclusivity by breweries that not only show acceptance, but also support for LGBT folks. Two examples that sprung to mind in the post were Sam Adams backing out of the Boston St. Patrick’s Day Parade after the parade announced the exclusion of LGBT marchers, and BrewDog creating a special beer to protest Russia’s anti-LGBT laws.

Well, I’m happy to find that I can now put Munster, Indiana brewery 3 Floyds on that list of breweries who are Doing It Right. 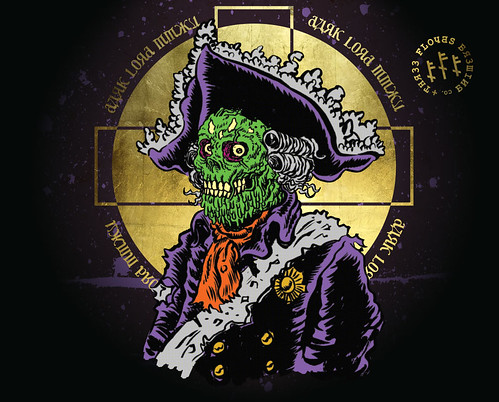 For those who are unfamiliar with Dark Lord Day, it is arguably one of the biggest brewery events in the U.S. An entire festival, with music, beer, and fantastic food that is the only day you can acquire 3 Floyds’ Dark Lord Imperial Stout. Tickets sell out almost instantly and for weeks until the event they are regarded by some as a kind of currency. Despite how good the beer is, it’s safe to say Dark Lord Day is a pretty big deal. Additionally, if you follow the news, you’ll know that 3 Floyds’ home state of Indiana is currently under some controversy with the recently put in Indiana Religious Freedom Restoration Act which, among many things, will allow Indiana businesses to refuse service to LGBT folks on the grounds that it would be against their faith (I know, I know).

So with that in mind, 3 Floyds, who adore the many wonderful people in their home state and hate seeing what is essentially a bullshit law tarnish the state in the eyes of the world, decided to give the finger to Indiana politics in the only way that made sense to them.

They called up the infamous and openly gay New Orleans “Queen of Bounce” Big Freedia to be a special musical guest for Dark Lord Day.

When news of the Fuse television star’s performance being part of Dark Lord Day’s protest against Indiana’s discrimination laws got out, the response from the beer community was overwhelmingly positive. “It’s been awesome!” Big Freedia says to me in a phone interview. “Lots of energy, lots of love, and lots of supporters.” Not surprising, as the idea of the event becoming a sort of protest came about through 3 Floyds’ many fans, who wanted the brewery to make a stand.

Along with the performance at tomorrow’s event (accompanied by Freedia’s Divas), the folks at 3 Floyds worked to craft Big Freedia Ale, a Pink Daiquiri Belgian Ale. “They called me and wanted to know a few things like what flavour I wanted, and I think I picked Strawberry.” Freedia said. “Its just exciting to be on the beer and have something named after you. I’m excited to try it!”

This kind of gesture on 3 Floyds’ part is pretty amazing. In the small picture, it will show the many visitors that come by for Dark Lord Day that not all of Indiana’s fine citizens are for Gov. Mike Pence bringing in this “religious freedom” law. In the bigger picture, the publicity and overwhelmingly overt public advocacy for the rights of the LGBT community may inspire other breweries (and companies) to lift up their welcome sign a bit higher as well.

“Everything has a reason and a purpose.” Big Freedia says. “And I think that it definitely will help open some doors in different ways. I definitely think good will come out of it all.

Big Freedia’s show “Queen of Bounce” can be seen on the Fuse channel Wednesdays at 11/10 Central. Her memoirs, titled “God Save the Queen Diva” will hit shelves on July 15th and is available for pre-order. While a new album is slated for release in the Fall, Big Freedia has recently collaborated with LA-based Lazerdisk on a remix of “‘Ol Lady”.