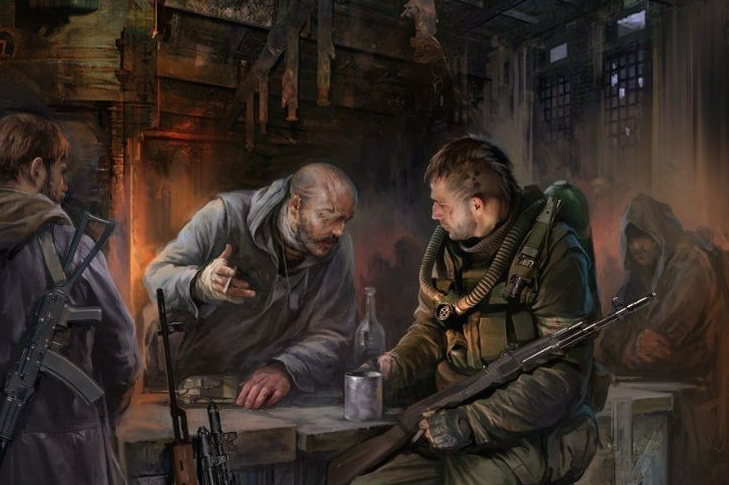 This post is sort of my way to put to use one of my favourite writing exercises. At the start of each creative writing class in school, our teacher would put some music on and allow us to do some freeform writing for 15 minutes or so. This would allow us to get the worries, thoughts, and memorization techniques of our other classes out of our systems and shake up the creative juices in our heads, which would better prepare us for thinking outside the box.

After a couple of years of writing beer columns and, now, two beer guides, I’ve kind of been feeling a little creatively stagnant. I’m still enjoying a lot of what I’ve been writing, but everything has been too steeped in the serious, and I like to think this blog is a mix of both serious and fun. So with that in mind, and in an effort to shake up my brain a bit, here is a fictional article for a fictional newspaper that features a few of my favourite breweries in the far distant post-apocalyptic future, where civilization has been destroyed and is currently in the process of being rebuilt.

It’s not a secret that the world is a dangerous place to travel. From the human threats of bandits, pirates, and cannibals, to the non-human ones of super storms, large insects, and of course creepers, one has to tread carefully when seeking out adventure or even simply visiting friends and family. But as readers of this magazine are no doubt aware, the ancient saying “travel broadens the mind” quite often rings true and makes such threats a reasonable price to pay. The world is out there and with it a wealth of experiences. Different people, different customs, different food…

And of course, different beer.

With the seemingly infinite number of settlements, towns, and cities out there it’s almost impossible to keep track of all the breweries contained within them, making small batches of beer using local ingredients and techniques, and brewing exclusively for their local communities. While a complete record of the world’s breweries hasn’t been created yet, word does travel fast on a few individual ones that have captured the imagination and excitement of travellers. So with that, here are three breweries that are worth seeking out in the wastes.

Nepho Brewing
Barker Square, Tuskin Cloud City
If you happen to be a sky sailor, on the hunt for Glow Mist or *cough* less legal rewards,

stop by the Tuskin Cloud City at 56.156259, -40.517578 to refuel your ship, exchange your goods, have a nice rest, and most recently, try some new beer. Nepho Brewing, located in Barker Square of the city, is the result of two former pirates who became better known for their brews than their bounty acquisition. Of the cloud cities out there, the duo decided that Tuskin was the best, as they’re more known there and the city’s placement above the near constant flow of Superstorm Clouds make it perfect for harvesting cloud water with minimal tax from the city. The brewery’s flagship offering, Perfect Storm Mild, is dark in colour with sweet toffee notes and an earthy, roasted character that adds balance before moving towards a dry finish. It’s also fairly low in alcohol, which is better suited to the clientele of sailors looking to lighten their wallets and ease their worries while on a week’s shore leave.

Bushwick Base Brewing
Jefferson Street Station (L Line), Brooklyn, New York
While the majority of the once great city of New York is in ruins and infested with Creepers and a varied number of mutated monsters, the city is still bustling, although primarily underground in the former MTA tunnels. If you’re looking for a great place to rest easy for a beer, walk down the L line to Jefferson Street Station, where Bushwick Base Brewing’s taproom is serving up some quality beverages that are sure to keep you warm at night. Working off-site out of the former Kings County Brewers Collective building, the 20-person team of former (and current) mercenaries risk their lives to go above ground, power up the generators, harvest from their rooftop farms, and brew for the masses. Because of the risk involved and infrequency of the releases, the price on a pint is pretty high, but the creativity and wide selection found in the candlelit taproom makes the cost worthwhile. As for the beers themselves, they’re all named after military slang terms, reflecting the brewer’s backgrounds. Expectant IPA is the most often consumed of the beers, and for good reason. It features a fairly light mouthfeel with an explosion of tropical fruits so bright, you could swear it could light up the MTA tunnels. However, if you have some coin and you’re lucky enough to be in the city when it’s released, the seasonal imperial stout 40 Mike-Mike is worth getting. Sold in handmade canteens, a few sips of this 18% beer will warm you right through while providing, if you’re lucky enough to have them, fond memories of chocolate and coffee.

Loup Garou Labyè
Bayou Pigeon District, Atchafalaya Basin, Louisiana
Located in a long-abandoned oil rig deep in the Bayou Pigeon district, Loup Garou Labyè has proven to be a popular brewing spot for settlers to the Atchafalaya Basin. The amazing thing about this brewery is that the entire community in the district are running it, enabling brewing operations to go on 24/7 and making it one of the most frequently consumed beers in the South Louisiana region. Making use of purified swamp water and local greenery, the beers are nothing if not unique. Of note, the Voler Porter, for instance, is made using locally harvested graine à voler (otherwise known as ‘Cajun Peanuts’ or American Lotus seeds), which are toasted and thrown in the boil, adding for a subtle peanut butter character.