I’m currently at my family’s cottage in beautiful Muskoka, sipping on some coffee, watching the beautiful day out there, and starting to come to terms with the fact that I’m no longer in that beautiful state between Christmas and New Year’s Eve where time doesn’t matter and all that exists is sleep, media, and chocolate.

Firstly I’m going to get it out of the way. In a lot of ways 2017 was a garbage fire of a year. It was like the shitty, more gory sequel to 2016 and I’m glad that this milestone is done. Politically, if there’s something that can be taken from the year, it’s that we no longer should be HOPING for a better year, but picking up our axes and actively working to make it better.

Personally it was a hell of a mixed bag for me. I moved out of Scarborough and into a wonderful house in Cabbagetown with my new roommate Candace Shaw (who has done some amazing work in creating a report card for female representation in Canadian music festivals) and have been thriving pretty well, making new friends with the folks in my excellent building and community. Unfortunately, my neighbour and super, Andrew Kinsman, went missing in June 26th and still hasn’t been found. I’ll spare you all the details on it, suffice to say it’s been a messed up experience. But also, I started getting out of a pretty bad depression and have been feeling more able to breathe creatively and able to make friends. Huzaah for that! 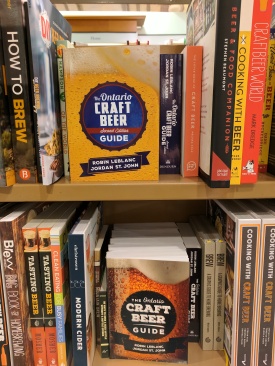 Beer-wise things have been a hell of a ride. At this time last year I had about four entries left to do on the Second Edition of the Ontario Craft Beer Guide, released in May. Jordan and I remain incredibly proud of this book, and still feel that it’s the best representation of what we wanted for the first book. We figured out a formula for working, raised the number of suggested pubs to over 100, and included colour photos mostly taken by me throughout the book. The book launch, and its resulting tour of speaking gigs and media interviews, made for a busy and wonderful time. I’m so glad that so many people have been realizing how wonderful Ontario is by exploring the province through its beer.

I also finally got to make some collaboration beers with brewers! I’ll talk more about them in a more detailed post later on, but the first was made with Sawdust City Brewing for the book launch and called 12:01 Northland, a Vermont-style IPA named after the first Ontario Northland bus out of Toronto that I took often while writing the book (and that makes stops in the brewery’s home of Gravenhurst). I’m really pleased with how it turned out! Was bright and cloudy as hell, but proved to be a very accessible beer, with lovely citrus notes in smooth body. I actually miss the hell out of this beer. The second collaboration was a hell of a fun one and made at Sawdust City with brewer Duncan Crone and former brewer-turned-ingredient wizard Dan Beaudoin from David Carriere & Associates. Basically, the three of us got together for our mutual love of the McElroy Brothers, who put together a well-known podcast called My Brother, My Brother & Me among MANY other things. So we decided to go a bit goofy with it and make a Black Milkshake IPA with Haskap Berries, all while listening to the podcast and making 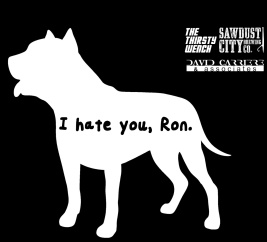 constant jokes about it. The results of our efforts, poured at the Sawdust City Saloon, were a huge hit and the beer, called I Hate You, Ron (Made in reference to a MBMBaM bit) turned out super nice, with very little roasted notes and the blueberry-like haskap berry balancing things out beautifully. Like I said, I’ll write more on my experiences collabing later on, but I’ll say that I learned a lot in terms of figuring out what flavours would work, had a ball brewing at one of my favourite breweries, and made some awesome friends in Dan and Duncan, who I now play Stafinder with.

Besides from that, there’s been some great work developments. I left working as Torontoist’s beer columnist, but am now writing columns for Quench Magazine and contributing to the newly created MASH Magazine along with my regular On Tap column at Muskoka Life/Metroland North Media, which…cripes, it’ll be two years I’ve had that column soon. Wow.

I’ve also been very fortunate to be a returning Judge for the Canadian contribution of the World Beer Awards, as well as a new judge for the World Cider Awards and the new New York State Craft Beer Competition & Governor’s Excelsior Cup. As always, I’m honoured to be considered a colleague among a prestigious many people judging these competitions.

In terms of beers consumed and new breweries opened…man, that’s a bit of a big answer. I will say that it’s been amazing seeing the ever-rapid growth of new breweries opening up this year. Hamilton in particular has come up with some good ones with Fairweather Brewing and  MERIT Brewing both opening up and creating some fantastic beers. It’s also done my heart good to see some kind of organization starting up between Northern Ontario breweries to the point where they made a mix pack for LCBO distribution. Here’s hoping more breweries up there get in on that and more people south of them try some of the amazing talent coming out of that region. 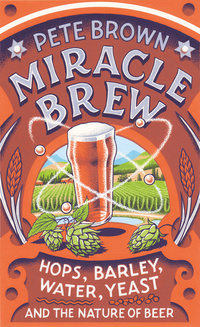 And finally, I’ve been reading a lot, but two beer books released this year (aside from my own haha) have stood out for me. The first is Pete Brown’s Miracle Brew, which goes into detail of the fascinating stories behind the four main ingredients that make countless different beers: malted barley, hops, yeast, and water. What makes this book stand out to me is Brown’s iconic and influential writing style, which dances between casual, funny, and informative with an ease that only he knows how to pull off and has no doubt honed with his many books and columns over the years. Miracle Brew stands out as perfect book for hardcore beer lovers and beer newbs alike.

The other has been Stephen Beaumont and Tim Webb’s Best Beers, a guide to the world’s…well…best beers. Good gods, it’s right there in the title. After writing my own, I’ve found a deep appreciation in the amount of work and information that goes into beer guides and Beaumont and Webb really went all out for this one, helping the reader solve the constant problem that arises in travel regarding beer selection. Best Beers cuts through the chaff and highlights beers and breweries all over the world that simply can’t be missed. Wherever I’ve gone in the world I’ve always had my copy of Beaumont and Webb’s Pocket Beer Guide handy, and Best Beers will definitely be a book that I pack in my travel bag from now on.

This year the craft beer community did a lot of naval-gazing, but what set it apart from the normal one was that we’ve been having a lot more productive discussions on where craft beer fits in the ever changing landscape and what it could be doing to grow in a healthy way.

For one, folks have been slowly waking up to the fact that the amount of people who demand bold, adventurous beers are no longer calling the shots and demand feels like it’s been shifting more and more to simple done well, with styles like dry-hopped pilsners being a kind of compromise that both like. Either way, there feels like a demographic shift, but I’m happy to say that breweries are realizing they don’t have to choose one or the other and can cater to both. I’m interested to see where that will go. Hopefully for the better.

Along with that, we’re seeing a lot more breweries in small towns pop up and no longer seeing any need to market to big cities for validation. Where a city like Toronto that burns through trends on anything at an alarming rate may go through a flagship beer in a month or two, there’s a better chance of making a flagship a bar staple two towns over. More and more folks in the towns are being turned towards well made local beer and by gods, I say let them have it.

Holy crap, we’re finally talking about racism and sexism in the scene in a way that isn’t totally cringeworthy. Let’s keep that going, and let’s keep shutting up the dudes who don’t see what the big deal is.

And this is all leading up to what my hope is every year, that as customers we take a look in our glass and, like we’ve done with our food, wine, spirits, clothes etc, we really appreciate how important it is to not skimp on the quality of our experience. In 2018 I hope you settle for nothing less than perfect in choosing the right beer for the right occasion.

And with that, I think it’s time to close my chromebook, blink for a bit in quiet contemplation, join my family for New Year’s Eve festivities, and pour myself a damn fine beer.