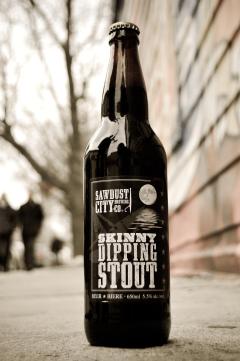 Sawdust City Brewing Co. is a newcomer here in Ontario that I’ve been anticipating to check out for a while. With their official headquarters not even opened up in Gravenhurst, Ontario yet (but will change this spring/summer), they’ve already been making a splash by kicking things off with five (count ’em FIVE) brews.

One of the interesting things I like about Sawdust City is that each of their beers has an element of Muskoka  in it without overtly saying so (to those outside of Ontario/Canada, Muskoka essentially is cottage country. Think lots of trees, canoe trips, campfires and mosquitoes). Their Gateway Kolsh, for instance, has a double meaning. While the beer can be considered a “Gateway Beer” to budding young beer drinkers, it also refers to Gravenhurst being known as “the gateway to Muskoka”.  And the beer I’m about to try now, Skinny Dipping Stout, refers to the colour of the water while skinny dipping in the middle of the night. Completely black. Wonderful concept.

Right, let’s get down to it.

AROMA: Lots and lots of chocolate with strong notes of coffee. Maybe a hint of vanilla. Very pleasant.

TASTE: Very creamy texture to it, which I’ve come to happily expect from Oatmeal stouts. Found an interesting area between “thin as water” and “thick as mud” that really works. The coffee notes make a strong entrance, but to me it’s acting like the bodyguard to make sure the room is clear for the real boss of this drink, the chocolate. My original notes say things like “Chocolate all up in this” and “Coffee Rules Everything Around Me” (apologies to the Wu-Tang Clan). And…man. Very big cocoa notes. And I think between that and the Columbus hops used, it provides a nice warmth to the beer.  Finishing taste notes are indeed the cocoa and that warmth.

VERDICT: You know, with having a cottage up in Muskoka (about 20 minutes away from Gravenhurst, actually!) I can say that I have gone skinny dipping in the middle of the night. I mention this because I feel that while this is a fantastic beer on it’s own, a bigger appreciation happens if you’ve had that experience. It really is one of the only beers I’ve had where the drinking experience really matches the concept of the name of the beer. You can drink it chilled, but after a while the warmth in the beer kicks in and you find yourself really enjoying it.  Then it’s off to a campfire. I really enjoyed this beer.

Look for Sawdust City beers in pubs around Muskoka and Toronto.