With the Saveur thing over and done with, I had an incredibly late flight the next night. An intentional move on my part, as I wanted to explore the city for a while and see what there was in ways of beer. Unfortunately, planned brewery visits had to be cancelled because cabs are ridiculously expensive in Vegas. A 20 minute cab ride is roughly $58, so unless you have a friend with a car or know your way around the public transportation system in Vegas (That was a big no on both for me), I decided to walk around to a few locations and gather some information. A big part of this involved walking around the city all day, which I won’t recommend without sunscreen and liquids, but is still worth doing for, among other reasons, the beautiful silence of the area compared to the chaos of The Strip. 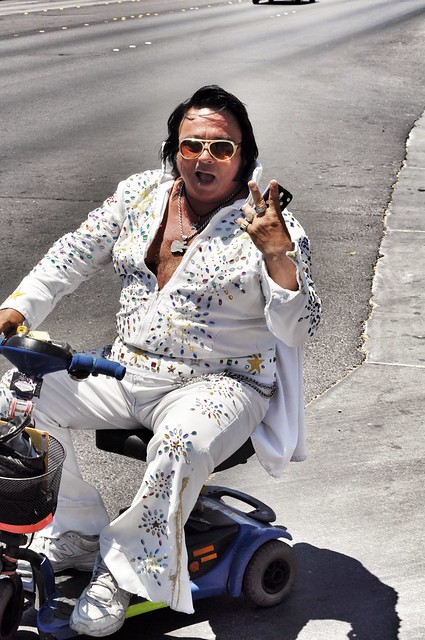 The Strip is an incredibly cheesy, horrible place. I mean, I appreciate it and get why many people would love it, but at the same time it combines three things that I can’t say I’m fond of: crowds of people, encouragement of rabid consumerism, and encouragement of binge drinking. Only on the Strip is it perfectly legal to walk around with yard-high margaritas or bottles of beer. Why? One reason is that it was happening so frequently that it was thought that police could be put to better use, but another thought suggests that since The Strip brings in those sweet tourism dollars, it’s in the city’s interest to look the other way for that one area at least. The result is a street full of incredibly drunk frat boys and girls screaming, hanging out of the windows of their stretch SUVs, collapsing and vomiting on the sidewalk…you get the picture. I kind of wish I was exaggerating on that, but that just seems to be a regular weeknight on The Strip.

The rest of Vegas, though, and I don’t mean Old Vegas, I mean the places where people actually live…can be a pretty magical place, with a thriving music scene and an incredible craft beer scene with it’s own unique breweries.

– Bit of a disclaimer here, one day clearly wasn’t enough to give a full-on guide or any real impression on Vegas Proper. While I did sample beers from a handful of the breweries, there was still a lot of ground that wasn’t covered. Oddly, despite my glowing review of the Strip, I will be returning to Vegas. These experiences are my own and really, if you folks have any suggestions of breweries and brews, please feel free to comment. –

For whatever reason you can’t leave the Strip at all, there still are places to find the beer there. Sin City Brewing Co. has a few locations within the Strip and about four regular beers with a seasonal, but personally I wasn’t impressed at all with what I had by them and found the advertising featuring busty gals in hot pants nauseating. For the odd reasonably priced bottle or 6-pack, the convenience stores and pharmacies have some hidden gems among them. Even the stores within the hotels have a few interesting bottles but remain, ironically, a crap shoot.

The best pub I found on the Strip was…well…THE PUB found in the Monte Carlo Hotel & Casino. It features an extensive menu of about 130 drinks on tap including a few ciders, though it should be said they are a bit on the pricy side. My biggest suggestion would be to purchase flights, as you can cover more ground that way without getting wrecked. The Pub is run by some good beer geeks who believe in having a strong local option, so several Las Vegas beers are stocked there along with many international and American beers. The environment is sports bar, so nights get kind of rowdy with things like Karaoke and sports-ball games , but for something in the mid-afternoon it’s the perfect setting. 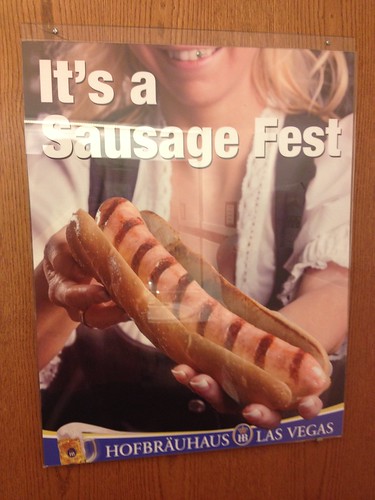 Beyond the Strip there is the Hofbräuhaus Las Vegas, a German Beer Hall and one of the weirdest locations I’ve been to. After 30-40 minutes of walking in the unforgiving desert heat, I figured a good Hofbrau Weisse break was in order. Upon entering I was greeted by a number of things. Firstly the music, which was The Chicken Dance. My sight was taken up by various cheesy German-themed posters and souvenirs with phrases like “It’s a real sausage fest in here!” painted on them, and a large screen television showing FOX’s hit show COPS was playing by the bar. As I sat there, drinking in the nourishing weisse, listening to music only Lawrence Welk would love and watching a 300lb drunk topless man surrender to the police on TV before attacking them again, I couldn’t help but feel I was still outside walking and that this was all a heat stroke-induced hallucination.  The beer was good, but I think my only reason for going back there would be for the completely surreal experience I had just sitting there.

After that I found my way to The Freakin’ Frog on the advice of my friend, talented journalist Joshua Ellis, who lived around the corner from there for years. The Freakin’ Frog is pretty incredible, a 5-10 minute drive from The Strip and a short walk from the University of Las Vegas campus, it has 12 regularly rotating taps, over 1,100 bottles, and a the largest selection of Whiskies I have ever seen held in their “Whiskey Attic”. What is on tap are some incredible national and international beer talent, but the bottles are the best reason to go there. Instead of giving you a list to choose from, they escort you in to their sizeable beer fridge and let you pick out what you want 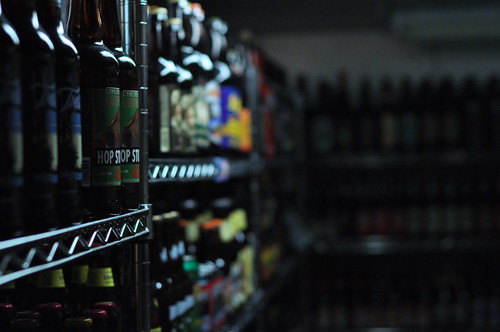 (while also offering suggestions in case you get overwhelmed) with a strict “you break it you bought it” policy . Once you’ve chosen what you want, they ring it up for you and it’s all yours. I took my time in the fridge to pick something that was a bit more suitable of a celebration beer than what I had the night before with Saveur and went with the Rueuze Gueuze brewed by reknowned Bruery from Placentia, CA. It lovingly danced the line between acidic and dry, with notes of lemon and apricots. Incredibly tasty.

I should mention as well, that near the Freakin’ Frog are two pretty fun non-beer things. First up is Alternate Reality Comics, by far one of the best comic shops I’ve been to with a great selection of indie titles. Run by a really nice guy named Ralph Mathieu, who is both incredibly knowledgeable and kind. Second is more if you’re a fan of Fallout: New Vegas. The National Atomic Testing Museum contains many amazing pieces and stands as the home to one of the most comprehensive collections of atomic history that shows that war never changes.

While I didn’t get a chance to head out there, as it was on the opposite side of the city and I had a limited amount of time, nearly every person I asked said that Khoury’s Fine Wine & Spirits was the place to go for my Craft Beer needs. It’s a dedicated and well stocked bottle shop with about 9 rotating taps and the option to open what bottle your purchase right there or take it home with you. A lot of the beer geeks I talked to had credited that place, open since 2004, as the place that got them in to craft beer. When I return to Vegas, it will be to check that place out for sure.

Now, as for Vegas Breweries, the two the struck me the most were Tenaya Creek and Joseph James. Joseph James has a Double IPA called “Hop Box” which had lovely notes of marmalade and pine, with a sweet finish, making it quite refreshing. Tenaya Creek seems to have adapted to the desert and is producing some damn fine beers that also double as much-needed heat busters. Their Hefeweizen was a bit light on the body, but did a good job of cooling me off. Plus I have to admit that the beer would be a good gateway beer to tourists of the city who may not know about craft beer. Their Calico Brown was also a good drink to match the weather, especially as there was no syrupy mouthfeel as it warmed up. Nice roasted notes with a creamy caramel taste at the back.

And that was, for the most part, my Vegas experience on my one day off. There’s still a bunch of breweries I would have liked to have checked out, (Award-winning Big Dog Brews, and Chicago Brewing Company) along with a few non-beer related things, but all in all it was pretty damn fun.