Well, I’m back from the desert city of Las Vegas, where I was treated by the folks at Saveur Magazine and Bellagio to come by, sample some fantastic culinary delights, and collect my award for Saveur Magazine’s Best Food Blog Awards in the category of Wine & Beer. I came to Vegas on the back of a trip to England, and so coming back to my own time zone on Saturday was…well, I’m still incredibly jetlagged, but not enough to give a small recap of my time with the folks at Saveur and the other fine bloggers who either won or were finalists. I have some thoughts on the actual beer scene in Las Vegas as well as some suggested places to go on and off the Strip, but I’ll be posting that separately in a couple of days for length purposes. You understand. 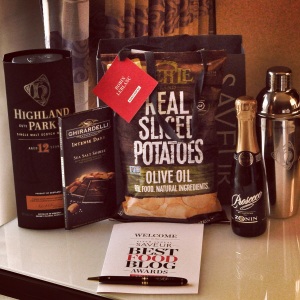 It was definitely one of the more interesting and extravagant times of my life. To check in at the luxurious Bellagio Hotel & Casino, with a beautiful view of their famous fountain, and have the whole damned thing complimentary…it was something I never thought would happen to me. The days leading up to arriving in Vegas my impostor syndrome was playing up, wondering when I was going to be quietly taken aside and told that there was some kind of mixup. But it didn’t happen and when I received a delivery to my room of a bag full of wonderful delights, a bottle of Highland Park 12 year-old Scotch, Kettle Chips, Salted Caramel Chocolate, a small bottle of Zonin Prosecco Italian sparkling wine…I realized there had been no mistake and began to look on this whole thing with a bit more honour. 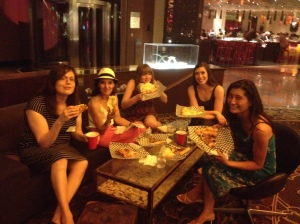 The Welcoming Reception was a tad awkward for me at first, but featured some lovely food samples based on some of the winning food blogs and good quality wines, all with the backdrop of the prestigious Bellagio Fine Art Gallery that currently has a “Painting Women” exhibition going on, primarily featuring works by female painters. As the evening was drawing to a close, I sought out some of my fellow Canadians and we all went out for pizza next door, sipping on our drinks and talking about our reactions, process during a post, and lives. It was the perfect end to the opening evening. 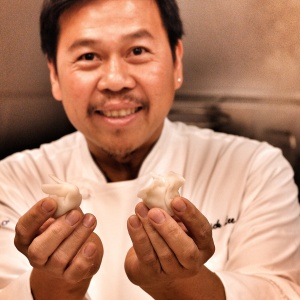 The next day was more packed, with two “behind the scenes” tours, where we walked in the underground city that is the Bellagio Hotel staff area and met up with Executive Chef Patrick Lee of the Bellagio restaurant Noodles. where we sampled some quality Dim Sum under the backdrop of the gorgeous Jasmine. Then it was on to a favourite, a talk with Bellagio Master Patisserie Chef Jean Philippe, where we sampled some absolutely orgasmic chocolates, including whiskey chocolate truffles made with Highland Park.

We then went to the Culinary Classroom, where we sampled some Highland Park Scotch Whisky. This actually proved to be really educational for me. Sampling the 12, 15, and 18 year-old varieties side by side gave me the ability to look at the distinct flavours and notes of each and I ended up developing a new appreciation for Scotch. Afterwards we went to the Tuscany Test Kitchen where, with the help of Highland Park, Bellagio’s Chef Edmund Wong, and Le Creuset we made special cocktails and signature meatballs with a divine marinara sauce and buffalo mozzarella.

Finally in the evening we went to the lush Sensi, where we convened to be presented with our awards, an engraved Le Creuset frying pan. Also the first ever “Blog of the Year” winner was announced to the well-deserved i am a food blog. We then sat down for an exclusive peek at Sensi’s new menu prepared by Executive Chef Royden Ellamar.

My only criticism of the couple of days was the very notable exclusion of beer throughout these events. My blogging colleagues and I all noticed that, while fine wines, whiskies, and cocktails were consistently presented at the two main events of the Welcoming Reception and the Awards Dinner, beer just…wasn’t considered. It was disappointing to be there winning an award for writing about beer and being told that beer wasn’t on the menu. In the end I had to stand my ground a bit and ask for a beer to celebrate my award with, which to the credit of Sensi staff, they delivered (their only craft option was New Belgium Fat Tire). It was just a bit of a bummer to learn that perhaps beer still has some ways to go to be considered more than just the lower option at higher end places. But that’s a rant for another time and I’d like to note that the Fat Tire went incredibly well with the Ribeye Steak that was served with dinner. I even passed my glass around for comparison and other writers were astonished at a pairing they had not considered before. I should say that I really don’t intend on criticizing my wonderful hosts for an incredibly lovely experience, but considering what I write about I just couldn’t overlook this.

However, despite that, the entire two days was a whirlwind of new friends, dazzling conversation, and some personal feelings of validation on my part. It really was an unforgettable experience and I must thank my hosts at Saveur and Bellagio for making this Canadian feel like a star. I really appreciate it.

Afterwards, I ended up going on the hunt and discovered a wonderful bar on the strip called The Pub, in the Monte Carlo Hotel & Casino, sporting over 130 beers on tap. Manager Lisa King set us up right with some custom flights (including their own brand), some excellent conversation, and more than enough recommendations and insight on the beer landscape in Vegas and who to talk to within it.

I made so many friends with amazing blogs, (some shout outs to Maureen Abood, Chinese Grandma, Bit By a Fox, Culinary Bro-Down, and FEAST: An Edible Roadtrip among SO many others) but I’m going to suggest following everyone in the winner page including the very talented finalists.

And there’s my recap folks. BUT WAIT THERE’S MORE! As I said up there, I had some beer adventures and that’s a post on it’s own. Stay tuned in the next couple of days for that one.