Considering that I’m writing this post with the Fellowship of the Ring soundtrack playing and a replica of the One Ring To Rule Them All hanging from a silver chain around my neck, I think it’s pretty safe to say that I’m a fan of J. R. R. Tolkien’s work. The world, the languages, the beautiful stories that go on throughout his books are nothing short of masterpieces for me. While my preference tends to lie with the Lord of the Rings trilogy, it’s children’s book sibling, The Hobbit, has a special place in my heart as a book that I would escape to when the trials and pressures of being a Grade Fiver would get to me (not a joke, there were plenty). So when a movie trilogy based on the book was being made I was optimistic. The movies are great. They’re no Lord of the Rings (Extended OR theatrical), but they’re fantastic films all the same, that capture many of the characters, in particular the company of Dwarves, in a way that really made the fifth grader in me smile.

So it’s with that same level of optimism I had when I learned that Central City Brewers + Distillers out of Surrey, B.C. would be making a series of beers based on The Hobbit films. The beers would essentially be a Canadian version of Olympia, Washington brewer Fish Brewing Co.‘s Hobbit beers, with Central City using their recipe. So Canada would have a beer based on a movie based on a book that is based on an American beer based on a movie based on a book. The thought of adaptation in this is very interesting and I’m sure that Central City adapted as well as changed slightly to create a series of beers that is altogether unique.

I’m actually a huge fan of beers based on franchises, since the name attached tends to, not totally unlike Bilbo Baggins, get people not inclined to be adventurous with beer to try something new. However, there were a few hurdles to overcome, the big one of these being timing. Fish Brewing came out with their beers in the Fall of last year, which left Central City racing to get their beers finished and out in time for the release of the final Hobbit film. And as an Ontario resident I’d like to add my personal gripe of the beers being available in all provinces of Canada EXCEPT Ontario, with the LCBO deciding not to go with it for reasons that I can only speculate on (hooray).

But anyways! You aren’t here to read my Ontario Retail System slashfic, you came to read about these Hobbit beers! Let’s get to them! 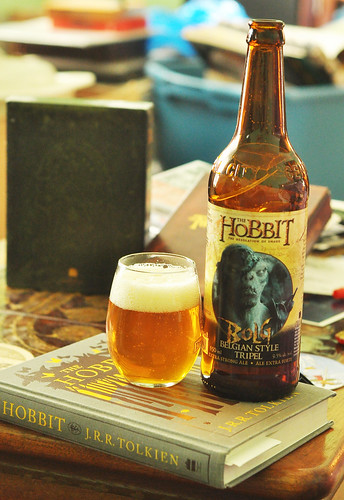 Bolg Belgian Tripel (9.5% ABV): The albino Orc Azog is one of the primary antagonists in the Hobbit film, having killed Thorin Oakensheild’s grandfather, the king under the mountain by beheading him. Thorin managed to cut off his arm, but Azog merely retreated and was able to hunt down his nemesis Thorin with his son Bolg. But the movie actually demoted Bolg, whose father is long dead and is merely mentioned by name in the book, with his son actually being the Orc leader of the Misty Mountains and leader of the Goblins of Moria.

All that to mean that for whatever reason, Bolg’s role in The Hobbit is one of the more problematic and ill-conceived (at least in the movie version). He doesn’t totally work and, I’m afraid, the beer, a belgian tripel, doesn’t either. To its credit, it starts out with promise. Both aroma and taste have some lovely notes of honey, dried fruit, and cloves in them. But the taste falls apart at the end, when things get far, far too bitter.

The Precious Pils (5% ABV): Oooooh we likes it, Precious! We likes it! The colour is golden like the Precious! Golden, Precious! Very balanced, it is, with slight grainses and a clean finish, Precious! The dry note at the end is especially good!

As it warms the dryness grows, but we still likes it, Precious! We likes it! All ours! Forever and ever!

Smaug Stout (8.5 ABV): “Revenge! Revenge! The King under the Mountain is dead and where are his kin that dare seek revenge? Girion Lord of Dale is dead, and I have eaten his people like a wolf among sheep, and where are his sons’ sons that dare approach me? I kill where I wish and none dare resist. I laid low the warriors of old and their like is not in the world today. Then I was but young and tender. Now I am old and strong, strong, strong, Thief in the Shadows!”

With a quote like that, you would expect that a beer named after a huge, heavily armoured dragon, especially Smaug, to be pretty damn big. So it’s with no surprise whatsoever that it’s an 8.5% ABV Imperial Stout with Habanero Chilis was created to honour the Dragon who took over the Lonely Mountain.

The aroma sets up a really good expectation, as the chilis come out very prominently, followed closely with its friends cocoa and coffee. The taste is incredibly creamy and smooth. Very well-balanced. A bit disappointing, as the chili notes in the flavour was a lot more subtle than the aroma led me to think it would be, but that aside, it’s an incredibly well put together stout.

All in all, two of the three offerings blew me away. The pilsner is a thing of beauty and the Smaug Stout is an incredibly close second.

Now go gather some of your close Dwarf and Hobbit friends, pour a drink, and sing a song. Or read the book together. Whichever works.

“Hey, ho, to the bottle I go,
To heal my heart and drown my woe!
Rain may fall and wind may blow,
But there still beeeeee many miles to go!

Sweet is the sound of the pouring rain,
And stream that falls from hill to plain!
Better than rain or rippling brook,
Is a mug of beer inside this Took!

Strange and dark is the world outside,
But in the pub we’ve naught to hide!
With lots of ale, and barley wine,
This evenin’ is surpassin’ fine!

Harvest’s in and cold without,
An’ hobbits strong are hobbits stout!
Naught to fear, and naught to think,
For hobbits nowwww have ale to drink!”