Recently Sawdust City sent some beers my way, some of their current fantastic offerings. But there is one in particular that I didn’t read the can of until now, and that’s of the “There’s No Way of Knowing” Can-Conditioned Saison. It reads like this:

As ‘Ol Man Winter begrudgingly releases us from his icy grip, Sweet Lady Spring swoops in and softly serenades us with her song. The snow slowly recedes, the days grow longer and we once again head outside to feel the warmth of the new vibrant season. What does the new season bring us? What does the future hold? Really, there’s no way of knowing. With the bright effervescence of a spring day and flowery aromas of fresh citrus, There’s No Way of Knowing Saison brings us all we love about this season. Light and breezy, it’s the perfect accompaniment to new beginnings. 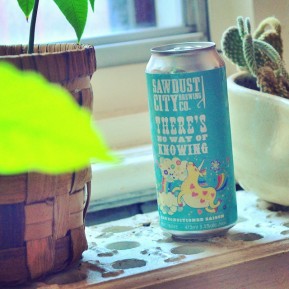 And I gotta say, this is the first time the copy on a beer can has distinctly given me the feels. The main reason being that I’m currently going through a new beginning myself at the moment. You see, I’ve left Toronto to stay in Montréal for two months. Not for any beer-related reason, it was just one of those times where I was looking at my surroundings, my outlook on things, and my level of contentment and decided that I really, really needed a change of scenery. So I found some places on AirBnB, packed up my things, and hopped on a train. As for work, I’m fortunate enough to be able to fit all of my careers in to a single messenger bag (thank the gods for tiny external 1TB drives, dropbox), so I can work pretty much from anywhere. I’m currently typing this post from my April home, a wonderful 1930s three floor walk-up in Westmount, a pretty English-speaking neighbourhood with more parks than I can count and with no shortage of markets, bakeries, and cheese shops. Some 1920s jazz is playing on my little Bose speaker, the sun is shining brightly through the windows, and after two weeks I’m starting to think that this sort of new beginning was a fantastic decision. All that is to say that, while unpacking the luggage in my home for the next two months, reading this can kind of hit me in a spot that had me feeling a bit emotional.

But anyways, back to the beer stuff. Because of COURSE I’m going to do some beer exploring while I’m here.

So far my first impression of the beer scene here in Montréal has been incredible. There are many breweries here doing some amazing things and many of them, as well as the local drinkers, seemed to have fully embraced the concept of “simple

done well” while also having a deep appreciation for the experimental and out there. Here the concept of going to a bar with a book to unwind is very strong and as a result, I’ve been happy to find that some of the more trendy beer spots have been incredibly spacious, many of which still have tables available on a busy night. The combination of not being claustrophobic and not having my thoughts drowned out by too-loud music or people yelling was refreshing to say the least.

I haven’t been to too many spots, but the ones I’ve been to have been winners. Dieu du Ciel, often on the top of the list of places to visit when in the city, was understandably packed and filled with many of their incredible beers on tap, including a one year-old version of their famous Imperial Stout Péché Mortel, a selection of refreshing and complex wheat beers, and Gospel, which may be one of the best nitro Stouts I’ve ever had, featuring a creamy mouthfeel that is expected with nitro stouts, but a very dry finish that just makes me want more.

Second up was Vices & Versa, which so far has become my favourite pub to visit. A startling 35 taps on rotation featuring some of the best beers and ciders that the province has to offer. With two huge rooms and a backyard patio that locals flocked to once the weather went above 0°, I have never had a problem finding a table to sit at, and the ability to order a half pint has made for a really nice budget-conscious evening of experimentation. Some highlighted beers I’ve ordered from that have been the Dunham Saison Rustique, a beautiful saison with a taste that matches the aroma of citrus, flowers, and pepper, and the Transylvania Pale Ale by Kruhnen, a unique IPA blended with spices that was so well put together I ended up having a few pints of it.

The other three places I didn’t spend much time in, but Broue Pub Brouhaha, which will be a ten minute walk from my place in May, has an incredible selection, constant events going on, wonderful ambiance (Think David Lynch’s America designed by Punk Hellbillies), and every Tuesday has a “Randall Night”, where a selected beer is mixed with different ingredients for a whole new beer experience and left to go on for a week. Now it’s on to the places of note I went to with local beer writer David Atman and visiting Manitoba blogger Cody Lobreau… Isle de Garde has an ambiance that I would normally expect in Toronto bars. Dimly lit, clean, minimal furnishings, jam-packed with people (Apparently there is often people waiting at the door for a spot to open up), but once in there, you’re in for a relaxing time and the house’s own Bitter is mind-blowing. And finally, Le Cheval Blanc is a fantastic microbrewery that I’ll be visiting again soon for a full flight of heir selections. I ended up having the Framboise when I was there and it was wonderfully subtle and refreshing.

So that’s all I have so far, but stay tuned to the site, folks. There will be a LOT more activity on here than there has been recently. I’m exploring new things in a province that I’ve never spent more than a weekend in before, so I’ll have a lot to report back on and a lot of people to talk to, and a lot of fantastic beers to sample.