As the travel, along with the huge amounts of stress and panic brought on by the ultimately rewarding privilege of working on a second book (MAY 20TH, FOLKS!) has officially died down, I’m finding myself looking towards my own fridge for inspiration, and finding that over the years I really haven’t been short of that. Here are two reviews of a couple of rather unique Ontario beers.

Those who are aware of Beau’s All Natural Brewing Co. out of Vankleek Hill tend to know a 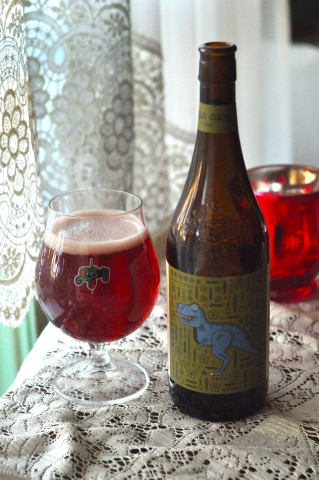 few things about them. There is of course the fact that they have one of the best corporate cultures among their staff and that their eye-catching branding really makes you want to seek them out. They have an almost cult-like following, which is in part due to the fact that they come out with a new one-off or seasonal beer roughly every week or two. Going at that rate, it’s not unsurprising that Beau’s is one of the first breweries Canadians tend to think of when it comes to going a little wild, good or bad, with ingredients. A beer made with rosemary, thyme, and lavender? They’ve done it. A beer made with beetroot powder, spruce tips, juniper berries, and hibiscus flowers?

Well, as it turns out, that’s the beer I’m drinking right now. Tyrannosaurus Gruit was a beer that capped off their annual FeBREWary, a solid month of beer releases and events. It’s made with the ingredients listed above and is part of the brewery’s obsession with gruits (that is, beer brewed without the use of hops, not a terrible misspelling of our favourite tree-like character).

LOOK: Red. Red red red. Very red. Damned red. There’s beetroot powder and hibiscus in this. I would be concerned and a little frightened if it wasn’t red.

AROMA: The beetroot dominates this one. Slight hint of spruce tips and just a touch of juniper near the end of the aroma, but this smells like it’s going to be pretty beet-forward.

TASTE: …And I was right. Up front is nothing but beets, but it’s followed up quickly by a peppery character and a lightly sweetened tang, before moving in for a dry finish. Oddly, and I don’t mean this in a bad way at all, it’s kind of like biting into a pickled beet. You get the choice ingredient, followed by the pepper, and a somewhat bittersweet note in the end. At the finish, like with having a piece of beet, you kind of want to go in for another. Chilled it has a really nice crisp note making an appearance.

AFTERTASTE: The dry note lasts throughout, and of course the overpowering beets still linger, but I feel the aftertaste is where the hibiscus tends to shine a bit brighter. Light cranberry flavour comes in nicely, making the experience quite pleasant.

OVERALL: Personally I think the beetroot notes, while wonderful to taste, was a little too overpowering on this one and I would have liked to have seen the hibiscus celebrated a bit more, or at the very least something that could dance with the beet a little better. Something sweet and tart, like raspberries, probably would have brought this out a little better. That said, I really enjoy the flavour profile of this beer and I’m glad that there’s a beet beer made on a fairly larger scale. It’s an ingredient that I’d like to see more of. 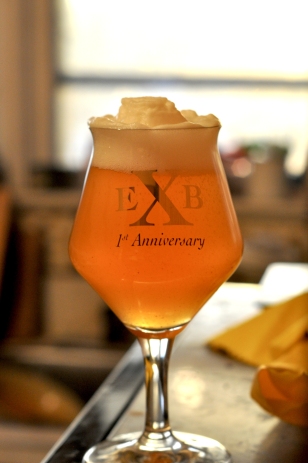 I was recently in Niagara Falls with some time on my hands and, accompanied by the incredible Jill Currie and YouTube beer reviewer the Albino Rhino (whose festival, The Albino Rhino Beer Fest, which has proceeds going to the Ronald McDonald House, is coming up on May 27th), I took my first visit to the Exchange Brewery, and it was way past due. Head Brewer Sam Maxbauer, formally of Jolly Pumpkin Artisan Ales in Michigan has been bringing his experience into the inventive beers this brewery produces and while only a year old, have established a barrel-aging program and a yeast cultivation effort (no doubt headed up by former Louis Cifer brew master Christine Nagy, who is a master with yeast), that is producing some wonderful results. They’ve also been getting some recognition on a non-local scale, taking home the title of Canadian Brewery of the Year at this year’s New York International Beer Competition. The space itself takes its name from the telephone exchange that the building once housed and the brewery has obviously kept with the theme, with many of their beers being numbers and symbols usually found on an old phone.

The * Session Saison runs at 5% ABV and comes in a beautiful 750ml bottle.

LOOK: Before getting to the appearance, a word of caution: open this over the sink. It may not gush out, but the carbonation is very aggressive when first opened. The upshot of this is remarkable head retention [post-writing note, it’s been over a half an hour since I poured and the large, foamy head is still there. Damn.]. Now, as for the look, you have what looks to be a medium to dark gold colour that glows remarkably when put up to even a minimal amount of light. It’s quite a hazy beer, making it damn near impossible to see what’s behind the glass.

AROMA: It’s a very light aroma, with light hints of white pepper, belgian candi, and just a dash of cloves.

TASTE: In mouthfeel it’s pretty light, but that shouldn’t lead one to believe that it’s a simple beer. There’s quite a journey here, starting with that white pepper note addressed in the aroma and leading towards something more, a kind of earthy, herbal note with a hint of cloves that makes way for its slow finish, that has a nice, cedar-like dryness.

AFTERTASTE: The cedar-like dryness stays with you in the finish, but as that fades over time, I find that I’m still getting the odd bit of clove in there. It’s not overpowering, just a murmur. Quite nice!

OVERALL: I can’t question the quality of this beer, as it’s very well-made. I feel like this would make for a good drink to introduce folks to the concept of highly complex flavours in beer without having to give them an imperial sour whatever. Its light body and wonderful flavour profile makes me wish I had more of this beer.