A couple of weeks ago I was at a round table discussion in Guelph put on by Wellington Brewery called Queens of Craft, with proceeds of the event going to Women in Crisis Guelph. Basically it was a lot of Ontario’s most respected women in the beer industry and me talking about a subject of our choosing to an audience of women. It was a thrill to even be asked to be a part of it.
Unfortunately, I think I blew it a bit. At the last minute we were told that the 20 minutes we were each getting to talk would be cut down to 10, with a bell hitting the eight minute mark indicating that we better start wrapping up and talk about a beer we had selected for a tasting. I had things I wanted to talk about, but the cut time, the bell, my jet lag from a recent trip to England, and my inexperience with public speaking left me a bit of a rambling, nervous mess. I’m pretty sure I came off as a looney.

I was disappointed, because I had some things I wanted to say, but time constraints and social anxiety ruined it. So after sitting on it for a bit due to preparation of travel and the travel, here is what I wanted to say.

I started this site as a way to chronicle my own discoveries about beer in a way that my close friends could read up on if they wanted. I’m still a bit perplexed on how it got as far as it has and a bit weirded out by the whole Saveur Award thing. When I started I didn’t know what I was doing, my palate was not even close to what it is now, and I was regurgitating information that, I thought, was pretty common knowledge. But I was learning new things, chronicling my educational journey, and having fun, which I think are the best reasons ever to start a blog.

I’m reluctant to give advice on how to run a beer blog (or any blog, really) to a semi or even fully successful level. Despite what marketing books and other bloggers tell you, there is no One Right Way to run a blog. It’s a natural progression that involves getting comfortable with the medium and cultivating the voice you’re going to use for it. I will say though, that unlike published writers, you have the incredibly unique gift of being your own editor, with no restraints of word count or tone. Use that gift to weave fantastic tales, get lost in a tangent, or just explain something. You don’t HAVE to be any voice that you aren’t comfortable with doing. I’m best comfortable using a tone that’s both informative and entertaining. Like I’m saying it in a pub over my second beer, for instance. Look in earlier posts and you’ll see that I’ve come a long way in figuring that tone out.

Only other pieces of advice I can offer in terms of starting out are to learn to use twitter as a great method of networking, go out to events frequently so you can put a face to the twitter handles, learn to take pictures to go with your words, and do not be afraid to go against the popular opinions of the community. If you don’t like something that others like, no one is at fault and anyone who tells you otherwise is a jackass.

Ah. And the final piece of advice I could probably give is to remember that beer is only HALF the fun of it. It’s what surrounds the beer, the people, the history, the lore, the places, the events, the moments…that make it so amazing. If you remember that you’ll save yourself some premature burnout later and it will keep you going in times when you begin to question the point of continuing. Beer is fun, and should remain so.

Now, on being a woman.

Every female in the beer industry gets asked the same question to a nauseating degree on what it’s like being a woman working in beer and why we’re in it and I’m always left bewildered because the tone suggests a kind of “What are you even DOING here?” element that I find offensive. As if it’s so outlandish that women are individuals with their own minds and interests that should take them anywhere they damn well please, including something that’s apparently regarded as a boy’s club despite there being no sign on the door that says any such thing. 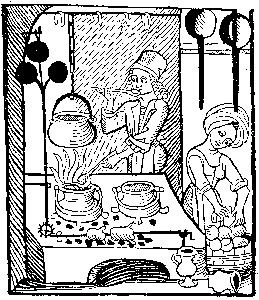 Plus, history is filled with women in beer. Before men took the reigns of beer through Industrialization, we had commercial female brewers (named Brewsters) in the middle ages, and brewing was primarily women’s work, being part of kitchen duties. Hell, the oldest recipe in the world is a Hymn to Ninkasi, the Sumerian GODDESS of Beer. While I feel that beer is something enjoyed by both sexes and I hate having to list the historical tidbits of women in beer as if to provide some sort of proof that women belong there (argh), I do like keeping this history in mind when certain people criticize women for enjoying or being a part of beer. Of course we do.

Modern day, I’m going to freely admit that there are problems, but it’s not as prevalent as one might think. There are offensive jokes, jerks who say jerkish things, and an outsider media that needs to run a “WOAH! WOMEN ENJOYING SOMETHING!” article every six months or so, but there are also engaging conversations, nerding out over a drink with complete strangers who end up becoming friends, and being part of a community that loves to educate and share its passion, which transcends genders and is the reason why I love the community so much.

Beer is a beautiful thing. As I said in an interview once, Beer has been the beverage of choice for royalty, slaves, peasants, gods, hard workers, executives, low class, middle class, upper class, and many other groups I can’t think of right now. It has helped end disputes (as well as cause some), has been a peace offering, and a way to break the ice to start lasting friendships. To me beer is a common factor for us all, a drink that humanity can sit down together and laugh over. To top all that off, despite all the years it’s been around, we’re still finding ways to make it differently.

Beer, one of the many testaments to the human race’s ingenuity, makes me want to raise a glass, view the beautiful colour of my beer, smile, and say “look at you”.

And that’s what I wanted to say.